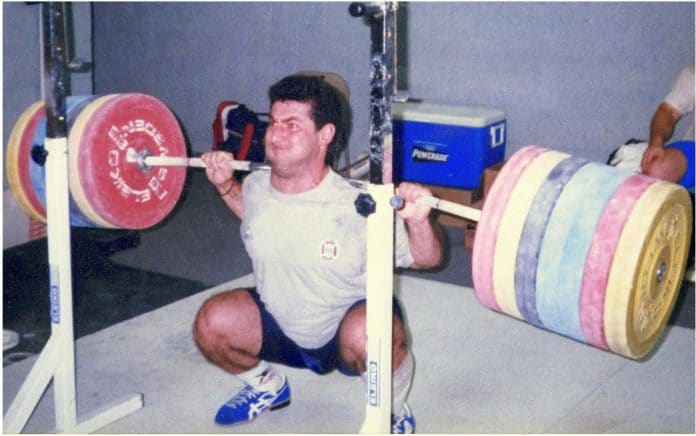 Strength athletes and power lifters use two major squatting techniques known as the high-bar and low-bar. They both depend on various transfer forces and movement mechanics.

High-bar squats are often used by weightlifters, recreational lifters and crossfit athletes. On the other hand, low-bar squats are typically used in powerlifting. The rationale behind the choice for a particular squat largely relies on an athlete’s competition and training goals.

The basic differences between high-bar and low bar squat are quite obvious, but newbies may have a difficult time when deciding which one to choose. In this article, we will look closely into each squat, how they are executed, and why you must choose one over the other.

Bar Placement and Why It Matters

One of the primary differences between the high-bar and low-bar squat is the placement of the bar on the back. With the high-bar squat, the bar rests on top of the trapezius, a flat and wide superficial muscle that covers the posterior section of the neck and the upper back. You lean forward a little while making sure that you stay vertical in order to keep the bar over your mid-foot.

For the low-bar squat, the bar is positioned further down, about 2-3 inches lower, right on top of the spine of the scapula.  A cue frequently used for low-bar squat placement is to lay the bar across the deltoids, the triangular muscles located on the outer aspect of each shoulder.

Now, why does bar placement matter? In a nutshell, having a  balanced bar/lifter system, wherein you place the bar directly over your foot, will prevent you from falling flat on your face or dropping on your butt – unless the weight is light. However, even in such scenario, if you are in an awkward position, remember that you will be wasting precious energy just to prevent yourself from losing your balance.

As the weight of the bar increases, maintaining a balanced position becomes even more important. Note that during a back squat, the placement of the bar influences joint angles so it affects how forces are applied to the muscles in the low back, hips, and legs.So, depending on whether you’re using the high-bar or low-bar form, the position of the bar will dictate your posture so you can maintain the bar/mid-foot alignment. It will also dictate which muscles you’re going to use.

When to Use High-Bar

High-bar squatting is the most fundamental form of squatting. For instance, if you ask someone to drop into a squat, it’s quite likely the person’s body position will resemble a high-bar style squat. It is highly beneficial in weightlifting and most types of sports.

Weightlifting involves two explosive movements: snatch and clean and jerk. When you’re squatting, try to be very specific in order to achieve a high transfer over into the competition movements.You’ll often seethe high-bar squat being used in weightlifting because it enables athletes to train in torso, hip, knee, and ankle angles that are similar to those used during competitions.

In sports, the ‘athletic stance’ is typically used to refer to the starting position and associated movements. In this position, the athlete is standing with his feet roughly shoulder width apart, hips under them, and the knees bent slightly. This will enable you to maximize your speed, power, and strength, while minimizing the risk of injury. The high-bar squat will help you strengthen your body, both in the athletic stance and when you are moving in the said position.

The high-bar squat is ideal for building strength in the glutes and quadriceps. Squatting using the high-bar form simulates the receiving stance in the snatch and the clean, as you want your torso to be vertical in order to prevent the weight from falling forward. This will make you recruit your glutes and quadriceps; so it’s no surprise that high-bar squatting is a favorite among weightlifters. And since it is easy to learn, it is also popular among fitness enthusiasts.

The high-bar squat requires that your torso be as vertical as possible, so it follows that that you will not be able to lift as much weight when compared to the low-bar position. The vertical position takes pressure off from the spinal erectors and allows you to assume a deeper position than you can achieve in the low-bar squat. However, it compromises the amount of weight that you can lift because you can’t use your hamstrings and the entire posterior chain. Lastly, if you have a knee problem, the high-bar squat may impose too much anterior force and cause knee pain.

When to Use Low-Bar

The low-bar squat is used for two reasons: to increase load on the posterior muscle chain and to lift more weight. It delivers more load to the posterior chain by forcing the pelvis and back to absorb, handle, and generate force better. In turn, this leads to a forward lean of the chest and enables you to lift heavier weights.

In powerlifting, the low-bar squat is used because it highlights strength in the squat movement. Your torso can be less vertical while the weight shifts more to the back,allowing theglutes and hamstrings to become more engaged. The shift also means less range of motion is needed than in the high-bar squat. This makes the low-bar squat easier to do and allows you to lift more.

When your hips are forced back, there is less stress on your knees. This shortens the range of motion that they go through. Subsequently, much of the weight’s stress is shifted to the hips, glutes, and hamstrings. In return, your hamstrings will pull back on your tibia and balance the force imposed on your knees.

First off, the low-bar squat is a very stable position. This is in stark contrast to the high-bar position wherein the bar has a tendency to roll on your neck if you lean forward too much. While technique does come into play, you’re limited by strength, and not by torso angle. And because you are leaning forward more, your knees don’t move forward as much, thus limiting their range of motion.

The low-bar squat also effectively targets the posterior muscle chain. For these reasons, you will be able to lift more weight, which likewise explains why this technique is popular among powerlifters. Lastly, using the low bar form will help you balance the force around your knees since the hamstrings are pulling the tibia back. This is of great value to athletes with knee problems.

Low bar squatting can be quite tricky to execute to perfection. And since it is largely dependent on the hamstrings, your positioning –specifically your knees – is of paramount importance. If your knees move forward, hamstring tension will be reduced and will result in no bounce at all. Another aspect to consider is the lack of flexibility in your shoulders which will prevent you from placing the bar in the correct position, potentially causing pain in your shoulder, elbow or wrist.

Choose the squat style that will suit and help you achieve your training goals. If you are a weightlifter, then the better choice is the high-bar squat. For athletes, they may also find the high-bar a good choice in terms of transfer of gym to actual game performance.

Strongman style training and powerlifting depend on the body moving the maximum load possible, making the low-bar a more appropriate option. Even with a more horizontal torso, the body will be able to load weight better in the hips. Also, for people with knee issues, the low-bar squat is a more viable choice.