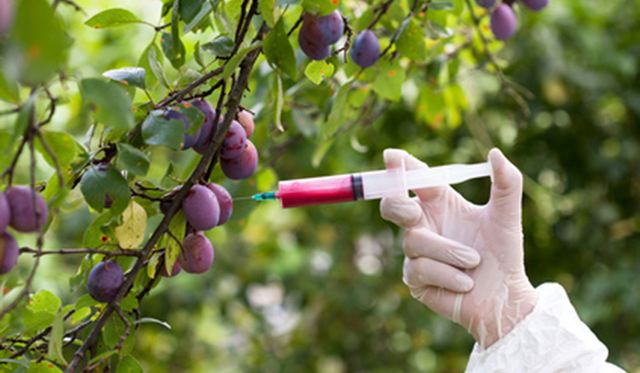 According to an article published on responsibletechnology.org, “10 reasons to Avoid GMOs,” GMOs are said to definitely be unhealthy. The website says that, “The American Academy of Environmental Medicine (AAEM) urges doctors to prescribe non-GMO diets for all patients. They cite animal studies showing organ damage, gastrointestinal and immune system disorders, accelerated aging, and infertility. Human studies show how genetically modified (GM) food can leave material behind inside us, possibly causing long-term problems. Genes inserted into GM soy, for example, can transfer into the DNA of bacteria living inside us, and that the toxic insecticide produced by GM corn was found in the blood of pregnant women and their unborn fetuses.” (1) Further according to the website, shortly after GMOs were introduced for commercial sale, a series of health problems increased in Americans. The website says that “the percentage of Americans with three or more chronic illnesses jumped from 7% to 13% in just nine years; food allergies skyrocketed, and disorders such as autism, reproductive disorders, digestive problems and others are on the rise.” (1) Sadly, despite these claims, scientific evidence and research is significantly lacking to confirm that the leading cause has any connection to GMO’s. Regardless, doctors and other leading experts advise that it’s best to protect ourselves and our children who are mostly at risk. In addition, the site says, “The American Public Health Association and American Nurses Association are among many medical groups that condemn the use of GM bovine growth hormone, because the milk from treated cows has more of the hormone IGF-1 (insulin-like growth factor 1)- which is linked to cancer.” (1)

When it comes to studies that are actually available to support claims we are directly consuming toxins that only genetically modified organisms harbor, collective-eveloution.com has plenty in a blog posted to the website titled, “10 Studies Proving GMOs Can be Harmful to Human Health.” One study that the article offers hails from Canada and is the first of its kind. According to the article, the study “has successfully identified the presence of pesticides -associated with genetically modified foods in maternal, fetal and non-pregnant women’s blood. They also found the presence of Monsanto’s Bt toxin. The study was published in the Journal Reproductive Toxicology in 2011. The study used blood samples from thirty pregnant women and thirty non-pregnant women. The study also pointed out that the fetus is considered to be highly susceptible to the adverse effects of xenobiotics (foreign chemical substance found within an organism that is not naturally produced.)  This is why the study emphasizes that knowing more about GMOs is crucial, because environmental agents could disrupt the biological events that are required to ensure normal growth and development.” (2)

Secondly, the site tells us that “GMOs contaminate-forever.” It is said that genetically modified organisms are known to actually cross pollinate and their seeds can travel. This has become a significant problem for farmers who struggle to keep crops pure, and it has further caused economic losses for organic farmers as well. The level of contamination is so catastrophic, that the site concludes that “GMO pollution will outlast the effects of global warming and nuclear waste… leaving it impossible to fully clean up our contaminated gene pool.” (1)

If you are familiar with herbicide, the next fact may even terrify you a little bit more, if you aren’t terrified enough. Herbicides are defined as a substance that is toxic to plants and that is used to destroy unwanted vegetation. According to the website, GMOs increase the use of herbicides. It turns out that most genetically modified crops are engineered to be “herbicide tolerant.” The website further says that “the deadly weed killer Monsanto, for example, sells Roundup Ready Crops, designed to survive applications of their roundup herbicide… Between 1996 and 2008, US farmers sprayed an extra 383 million pounds of herbicide on GMOs. Overuse of Roundup results in ‘superweeds,’ resistant to the herbicide. This is causing farmers to use even more toxic herbicides every year. Not only does this create environmental harm, GM foods contain higher residues of toxic herbicides. Roundup, for example, is linked with sterility, hormone disruption, birth defects, and cancer.” (1)

In an additional study from collective-evolution.com, it is discussed that glyphosate is an herbicide that goes hand in hand with GMOs. According to a study published in the US National Library of Medicine, “(it) showed glyphosate’s potential to be an endocrine disruptor. Endocrine disruptors are chemicals that can interfere with the hormone system in mammals. These disruptors can cause developmental disorders, birth defects and cancer tumors.” (2) Several additional studies concluded that glyphosate is also linked to tumors in rats, Autism, Alzheimer’s and Parkinson’s disease.

Lastly, according to responsibletechnology.org, genetic engineering creates dangerous side effects. They write: “By mixing genes from totally unrelated species, genetic engineering unleashes a host of unpredictable side effects. Moreover, irrespective of the type of genes that are inserted, the very process of creating a GM plant can result in massive collateral damage that produces new toxins, allergens, carcinogens, and nutritional deficiencies.” *(1)

In conclusion, it is safe to say the GMOs are definitely not safe and have been proven to be detrimental to human health. Surprisingly enough, even though we established how dangerous glyphosate is in itself, it is actually present in over 750 consumer products that are available for sale in the United States. It can be found in salts and amber like liquids. Despite the dangers of GMOs and the added usage of herbicides that GMOs create, we are still consuming them daily, and illness and disease among American’s remains frighteningly on the rise. Coincidence? You decide.