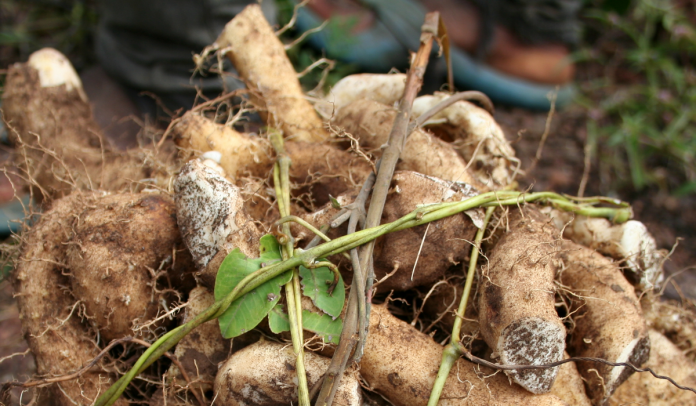 Glucomannan is a sugar made from the root of the konjac plant (Amorphophallus konjac). Glucomannan powder, capsules, and tablets are used as medicine. It is typically used for constipation, according to WebMD. “Research suggests that taking glucomannan by mouth can relieve constipation, in both children and adults; weight loss in both adults and children.” For type 2 diabetes WebMD says, “Taking glucomannan by mouth seems to reduce cholesterol, blood sugar levels, and blood pressure in people with diabetes.” The use of glucomannan also has an effect on blood sugar control, and lowering cholesterol in people with or without diabetes. In foods, glucomannan is used as a thickener or gelling agent. Glucomannan flour and powder are used in food. Glucomannan might work in the stomach and intestines by absorbing water to form a bulky fiber which treats constipation. It may also slow the absorption of sugar and cholesterol from the gut, helping to control sugar levels in diabetes, and reducing cholesterol levels. (1.)

Shape.com delves deep into the benefits of glucomannan and how it works in their article, “Glucomannan: The Weight-Loss Supplement Dr. Oz Loves.” “In a study conducted in 2007, published in the British Journal of Nutrition, participants taking glucomannan and psyllium husk combination supplement, lost approximately 10 pounds in 16 weeks compared to 1.7 pounds lost in the placebo group.” Further according to the article, another study using only glucomannan showed that an average of 5.5 pounds was lost over eight weeks, without making any other dietary or lifestyle changes. (11.)

According to the article, glucomannan has no harsh chemicals, strange drugs or additives, and the powder (a flour) and glucomannan powders are considered “likely safe” to use as an appetite suppressant. But there are said to be a few side effects that everyone should be aware of. Dr. Oz says that it’s important to drink lots of water while using this supplement. According to the site, he advises that drinking 8 ounces of water with 1 gram of glucomannan before each meal should always be a must. If you don’t practice healthy water intake while taking glucomannan, it is said that it can certainly induce constipation and clog up your digestive tract. It’s also advised to start slowly and work your way up to the full dosage to see how your body reacts.

So, how exactly does glucomannan work? Well, in order to better understand how it works, we must understand what soluble fibers are, since that is primarily what glucomannan is. Percisenutrition.com offers a good definition and explanation of soluble fibers in their article “All about Glucomannan” (11.)

According to their article, soluble fibers are a form of so-called “complex” carbs. Which means that they are more elaborate in molecular structure, and it is harder for our bodies to break them down, but they are soluble in water. When in water, soluble fibers form what is called viscous gels. A good example given by the article is fruit pectin, for example, which is used to thicken jams and jellies, while xanthan gum is used as an emulsifier that makes foods creamier. Soluble fibers are also known as prebiotics, which fight bacteria. Our gastrointestinal bacteria eagerly ferments soluble fibers, creating byproducts such as valuable nutrients or not-so-desirable gasses.

Although studies are lacking as to the precise performance of glucomannan and its effectiveness, here are some studies we can rely on:

“Dietary Supplements for Weight Loss” an article posted on the U.S. Department of Health and Human Services, through their National Institutes of Health website, offers a fact sheet on several dietary supplements, and for glucomannan, they write that “Glucomannan is a soluble dietary fiber derived from konjac root (Amorphophallus konjac). Some researchers believe that, like guar gum, glucomannan absorbs water in the gastrointestinal tract, thereby increasing feelings of satiety and fullness and prolonging gastric emptying [3,4].

The authors of a 2015 systematic review of six randomized controlled trials with a total of 293 participants concluded that 1.24 to 3.99 g/day glucomannan for up to 12 weeks does not have a significant effect on body weight compared to placebo [7,8]. Similarly, a 2014 meta-analysis of eight trials that included 301 participants found that glucomannan did not significantly affect weight loss compared to placebo [9]. The authors of an older meta-analysis of 14 studies designed primarily to investigate glucomannan’s effect on lipid and blood glucose levels concluded that 1.2 to 15.1 g/day glucomannan reduces body weight by a small but statistically significant amount (mean loss 0.79 kg more than placebo) over about 5 weeks [4].

Safety: Little is known about the long-term safety of glucomannan. Glucomannan appears to be well tolerated for short-term use, with minor adverse effects including loose stools, flatulence, diarrhea, constipation, and abdominal discomfort [4,7,9]. The use of tablet forms of glucomannan was reported to be associated with seven cases of esophageal obstruction in 1984–1985 in Australia [3]. Caution is therefore warranted when these forms of glucomannan are used. Powdered or capsule forms have not been associated with this effect [10].”

The bottom line is that if you want to lose weight, it is said you must eat less. But it is very difficult to make sure that our bodies and new diet regimen have enough fiber. If you have ever tried a new diet and noticed that you have a hard time sticking to it due to hunger, the reason you feel so hungry all of the time is likely the lack of fiber due to eating less food. Adding a glucomannan supplement to your regimen will surely help you feel fuller longer, and allow you the opportunity to receive the adequate fiber that is desperately needed to stick to the new diet.

7. Zalewski BM, Chmielewska A, Szajewska H. The effect of glucomannan on body weight in overweight or obese children and adults: A systematic review of randomized controlled trials. Nutrition 2015 31:437-442.

9. Onakpoya I, Posadzki P, Ernst E. The efficacy of glucomannan supplementation in overweight and obesity: a systematic review and meta-analysis of randomized clinical trials. J Am Coll Nutr 2014;33:70-8.