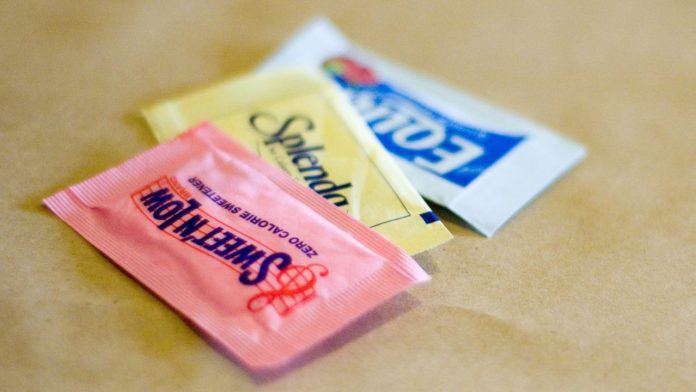 If you care about your health and what you put into your body, chances are, you have heard a horror story or two about how aspartame or other artificial sweeteners can have a profound effect on your heath, and not for the better. Some claim that aspartame or artificial sweeteners like Splenda are linked to heart disease, diabetes, weight gain and even cancer. Although it sounds great that you can substitute sugar with artificial sweeteners, with fewer calories and less advertised health risks, are they really all that healthy? Are the horror stories true? When we are dieting or attempting a healthier lifestyle, if we are cutting carbs, the number one thing we are cutting is sugar. Because sugar is added to almost everything we eat it seems, it’s important to try and figure out if one substitute is better than the other.

According to an article published on WebMD, “Stevia and Sugar Substitutes,” Stevia, Aspartame, and Sucralose are all FDA approved, therefore they are allowed to be placed into foods and beverages that we consume on a daily basis. If it is FDA approved, one would think that it has to be healthy or OK to have, with little to no health risks involved. WebMD breaks down each substitute and gives the scoop, as to whether or not these substitutes are just too good to be true.

Stevia is known to be a natural, non-calorie sweetener, made from a plant indigenous to South America. It has been around for centuries and now makes its appearance in sodas and many sports drinks. This substitute is also available in table top packets, liquid drops, dissolvable tablets, as well as baking blends. When it comes to brand names, SweetLeaf is a sweetener made from the stevia extract. Both Truvia and Pure Via are stevia-based. Some stores even have generic stevia products. (1.)

According to WebMD, the scoop on Stevia is that “highly purified stevia extracts, which are what you find on the market, are generally recognized as safe. Some people find that stevia can have a metallic aftertaste. Whole-leaf stevia or crude stevia extracts aren’t FDA-approved.” (1.)

According to prevention.com’s article “Is Stevia Safe,” we learn that “Experts and regulatory agencies around the globe agree most low-cal natural sweeteners are perfectly fine in moderation (we say “in moderation” because, calorie-free or not, sweeteners still don’t qualify as health foods you should guzzle down all day long, says Monica Reinagel, LN, a Baltimore-based nutritionist). Plus, recent research has debunked scary claims of sweetener toxicity.” (2.)

When breaking down the “skinny” on Stevia, the article further states that when it comes to safety, “Older animal studies show that high doses of stevia may be toxic to the kidneys and reproductive system, and could even mutate genes. That’s why the FDA doesn’t allow unrefined or whole-leaf stevia in foods, despite the fact that South Americans have consumed the plant for centuries. But newer data on stevioside and rebaudioside A—the purified extracts—does not show evidence of toxicity (though it’s worth noting that some of this research was funded by companies like Coca-Cola and Cargill, the maker of Truvia). In 2008, the FDA awarded its first Generally Recognized as Safe (GRAS) status to these extracts, which have been approved for use and sold in Europe, Canada, France, New Zealand, and Japan, where it’s been on the market for decades without any major safety issues. The WHO and UN’s Joint Expert Committee on Food Additives have also ruled them to be safe in moderation.” (2.)

Aspartame is a popular artificial sweetener that most have heard of. WebMD says that thousands of types of foods are sweetened with aspartame. Nutrasweet, and Equal are both name brand aspartame. Aspartame is a combo of two amino acids that provide sweetness with almost no calories. (1.)

Also, according to WebMD, aspartame “is one of the most exhaustively studied substances in the human food supply with more than 100 studies supporting its safety,” says the FDA.” (1.)

“An adult weighing 165 pounds would have to drink more than 19 cans of diet soda or consume more than 107 packets a day to go over the recommended level,” the American Cancer Society says. (1.Still, this news comes amid many independent claims that the sweetener causes headaches, mood swings and other ill effects. According to WebMD, “Some people have reported that aspartame gives them headaches or dizziness or affects their moods, but studies haven’t linked those symptoms to aspartame. If you have phenylketonuria (PKU), a rare metabolic disorder, avoid aspartame, because it contains phenylalanine. Any product containing aspartame has a warning label about that.” (1.)

However, according to healthline.com, “The Truth about Aspartame Side Effects,” while the sweetener remains popular, it has also faced controversy in recent years. Many opponents have claimed that aspartame is actually bad for your health, yet, according to the website, the FDA approves of aspartame, recommending a maximum daily intake of 50 milligrams per kilogram of body weight. Unfortunately, while extensive tests have been conducted on aspartame, there is no consensus as to whether or not aspartame is “bad” for you. However, the website does go on to say that the FDA, United Nations Food and Agriculture Organization, World Health Organization, American Heart Association, and the American Dietetic Association have all weighed in favorably on aspartame and these agencies have granted approval for the use of aspartame. (3)

Healthline further tells us that “In 2013, the European Food Safety Authority (EFSA) concluded a review of more than 600 data sets from aspartame studies. It found no reason to remove aspartame from the market.” (3)

Healthline also jumps into the controversy over the use of Aspartame and other artificial sweeteners by saying, “Aspartame was developed around the time the FDA banned the artificial sweeteners cyclamate (Sucaryl) and saccharin (Sweet’N Low). Lab tests showed that massive doses of these two compounds caused cancer and other disorders in laboratory animals. While aspartame is indeed approved by the FDA, the Center for Science in the Public Interest has cited numerous studies that reveal problems with the sweetener, including by the Harvard School of Public Health.” (3.)

According to healthline, some positive, natural alternatives for the use of aspartame include, honey, maple syrup, agave nectar, fruit juice, and molasses. (3) In short, individuals who experience adverse side effects should play it safe and avoid Aspartame, but most studies seem to conclude that it’s safe for those who are able to enjoy it in moderation.

Also known as splenda, this sucralose brand has a tag line that it’s made from sugar, (according to WebMD, this is a factual claim) and is said to be 600 times sweeter than sugar.

The scoop from WebMD on this sweetener, says that the FDA reviewed and reported more than 100 safety studies before approving sucralose as a general-purpose sweetener for foods. Because it’s said to be heat-stable, you can even use it for baking. (1.)

No matter which sweetener you choose, the Mayo Clinic says that artificial sweeteners may be highly beneficial for those who suffer with diabetes. Of course, this does not mean that every sweetener is the right sweetener for you. For some who have health problems that are listed in the warning for aspartame usage, aspartame may not be the right choice for you. As a result, the Mayo Clinic advises to make sure that you always consult with your doctor first, before ingesting anything that may have an impact on your health. (4.)

The Top 7 Plant-based Proteins You Should Be Eating