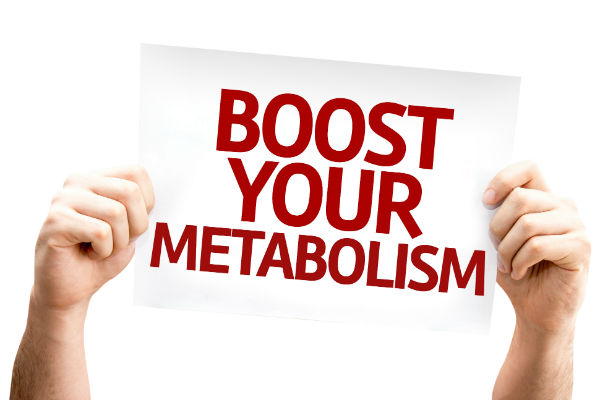 Metabolism is a term that refers to all the chemical reactions occurring in the body. Such chemical reactions are responsible for maintaining the living state of the cells, thus keeping your body alive and functioning. However, metabolism is frequently interchanged with metabolic rate, which refers to the amount of calories you burn. The higher your metabolic rate, the more calories burned and the easier it is for you to lose weight. Increasing your metabolism offers a number of health benefits such as providing some energy boost and a general sense of well-being.

Here are 5 easy ways to rev up your metabolism.

Eating can increase your metabolism for a couple of hours. This is referred to as specific dynamic action (SDA) or the thermic effect of food (TEF). It is caused by the extra energy required to digest, absorb and process the nutrients in the food you ate. Protein causes the biggest rise in TEF, increasing your metabolic rate by 15 to 30 percent, compared to five to ten percent for carbohydrates and zero to three percent for fats. The reason behind this is that protein is composed primarily of amino acids, which are more difficult for the body to break down, so you need to burn more calories to get rid of them.

It has been shown that consuming protein can make you feel more full and thus help in preventing overeating. A study also revealed that people are likely to eat 441 less calories per day when their diet consist of 30 percent protein. According to Jeff Hampl, Ph.D., R.D., the spokesperson for the American Dietetic Association, eating plenty of protein can increase your metabolism, making your body burn an additional 150 to 200 calories a day. However, this does not mean that you need to live on a high protein diet like Atkins. What you need to do is ensure that 10 to 35 percent of your total daily calorie intake comes from protein.

Muscle is more active metabolically than fat, and building muscle can help boost your metabolism. This means your body will burn more calories, even when at rest. Lifting weights will also help in retaining muscle mass and minimize the drop in metabolism that is normally associated with weight loss. In one study, a group of overweight women were subjected to a daily diet of 800 calories, along with either no aerobic exercise or resistance training. After the diet, those who did resistance training managed to maintain their muscle mass, strength and metabolic rate. The rest lost weight, muscle mass, and experienced a decrease in metabolism.

People who drink water instead of sugary beverages tend to be more successful in losing weight. The reason behind this is that sugary drinks contain a substantial amount of calories, so replacing them with water will surely reduce your calorie intake. However, drinking water can temporarily increase your metabolism. Studies revealed that drinking 17 ounces or 0.5 liters of water boosts resting metabolism by ten to 30 percent for about an hour. This can be even higher if you drink cold water because you will use energy to heat it up to body temperature. In addition, water can help fill you up. It has been shown that drinking water 30 minutes before a meal can help you eat less. Note that all the chemical reactions occurring in the body depend on water. If you are dehydrated, you can be burning up to two percent less calories.

Lack of sleep has been linked to an increase in the risk of obesity. This could be partly caused by the detrimental effects of sleep deprivation on metabolism. Lack of sleep is also associated with increased blood glucose levels and insulin resistance, which are both related to a higher risk of developing type II diabetes. Studies have shown that lack of sleep can induce the body to produce the hunger hormone ghrelin, while decreasing the production of the fullness hormone leptin. This explains why people who are sleep deprived tend to feel hungry and experience difficulty in losing weight.

Not getting ample quality sleep has also been shown to slow down metabolism. This may have something to do with the secretion of cortisol when you are under stress. Further, going to bed early may not be enough. Broken sleep, or when you are woken up often throughout the night, is not as healthful and restorative as eight consecutive hours of slumber. So, aside from crawling under the covers early, make sure you’re getting enough hours to get the rest and recovery that your body needs. The National Sleep Foundation gave some tips on how to get a good night’s sleep: schedule your exercise earlier in the day because working out within two to three hours of bedtime can make it difficult to sleep. Also try to soak in a hot bath, since warm water has been proven to make it easier to fall asleep.

It is recommended to engage in some high-intensity interval training which involves quick and intense bursts of activity. You vary your pace, push your limits, and then revert to a more comfortable pace. Then do it all over again: crank it up, recover, and repeat. This will increase your metabolic rate and help you burn more fat. In fact, your metabolic rate will remain elevated even after your workout has ended. This effect is thought to be greater for high-intensity interval training than for other forms of exercise. Just make sure that your cardio blasts last 30 seconds to five minutes, depending on your level of fitness. The objective is to get your heart rate up to 80 to 95 percent of its maximum rate. One more thing, don’t overdo any type of high-intensity interval training. Two sessions a week is more than enough, in addition to your other workouts.

Ashwagandha for Anxiety and Immunity

1 UP Nutrition Her BCAAs Review